The Importance of Marriage 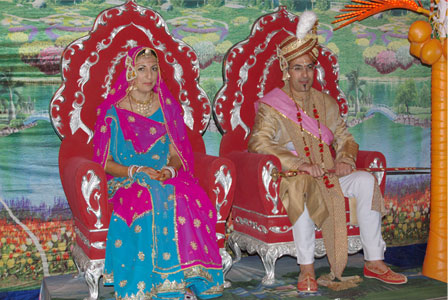 In Western Rajasthan with Summer comes marriage season. India is an agricultural country. Farmers finish their winter harvest of wheat and mustard in February so they have no more work in the fields for awhile. And they have money for spending. That is why there are many marriages, jagrans (spiritual gatherings), house inaugurations, and other social and religious activities in the months of April, May and June.

In our Hindu culture marriage is one of the 16 sanskaras – life cycle rituals such as baby naming or the first hair cut. For Indians, marriage is the foundation of religious and social work, and of course the continuation of generations. Rituals for the family and home are all conducted with and by the husband and wife together. When one family visits another to make a gift offering, it is done by the husband and wife together. We can trace this necessary partnership back to the original dual energy source of Shiva and Shakti, god and goddess. Each home and family becomes complete and powerful as Shiva and Shakti energies manifest as husband and wife.

To be fulfilled as a human, the Rishis (ancient sages) prescribed four foundational pillars of accomplishment which are called Purushartha:

The system of Purushartha cannot be fulfilled without participating in marriage. Many westerners see the system of arranged marriage as a breach of human rights because love comes after the vows. On the contrary, we see it as a sacred gift and opportunity for the participants to join with the universe in the potential of a fulfilled life, to learn the struggle of love and tolerance with a person chosen for you or with you, aided by God and family. In addition, we see it as a way of preventing the corruption of all those people living outside of the laws of Purushartha, and outside of marriage, and outside the community that is eager to help choose a mate worthy of the potential in each spirit.

What is a person to do without the opportunity of Kama? As s/he ages the opportunities to breach the ethics of a refined social fabric increase, and people become consumers of other people, instead of participating in a union which feeds and satisfies the needs of an entire community. If we only think at the superficial, material body level continuously, there is no opportunity to go deeper to a soul connection. Kama is natural pleasure between husband and wife, which brings about family love and affection. According to psychology and Tantra, if you want to understand things and have Moksha, to be free from things, then you need to be involved in a relationship that provides a deeper, long lasting experience. Inside marriage there is the opportunity to transcend the material connection, because of time and commitment. In India there is no option for divorce. Spouses have only one direction for their sexual energy for their entire lives. With Kama inside marriage we can understand and express our desires, which ultimately leads to Moksha, the ultimate Purshartha.

Indian marriage is a socially expected and accepted behavior. It is the meeting of two souls as well as two extended families. But there are some negative aspects to the system of arranged marriage, especially if it is thrust upon minor children who haven’t a say in the choice. Child marriages are illegal in India, yet they still occur. Because of illiteracy in rural communities, this corruptive tradition has not yet been irradicated. Many years ago I attended such a function without knowing in advance the purpose of the gathering. The bride and groom were five or six years of age. The bride didn’t even know the purpose of the function to which she was brought in a gown and jewels. It affected my heart so much when she started crying upon glimpsing the crowd staring at her. She had fear in her heart instead of love. I decided at that time that for the rest of my life I would never again attend such a function. When people came to know about my decision, followers started to understand the custom was no longer acceptable, and the cycle is slowly coming to its end.

I have recently attended a lovely wedding in Mumbai with the Modi family as they celebrated the marriage of their youngest son Amol to the love of his life Harshada – a true match made by the gods. The festivities lasted five days, launching first with spiritual events and rituals – ladies singing, Ganesha, Jasnath Sati. This traditional atmosphere pervaded all events to follow. They planned this nicely and did so much work. In every event there was a graceful hybrid of spirituality and the materialism required to entertain the guests – the gift of sense experience, one I will never forget. The parents seemed very much aware of both requirements. With this awareness, the western materialism of Vegas dancing girls and trapeze artists did not dilute the spiritual resonance wafting across miles of international buffets, stilt walkers, singers and Bollywood dance troupes. We can’t stop the western culture; we don’t want to. But if we can balance it against what already works from our own history – this would be great. Without the balance, families will crack.

We have been blessed to be the host of several weddings here at the ashram, Indian and western families. It is a beautiful, spiritual environment to celebrate unity, and enter into the stream of Purushartha. I enjoy it very much, the optimism, excitement, curiosity and intrigue of two families coming together. The flutter in your heart at the potential of true love…there’s something so lovely about a wedding.