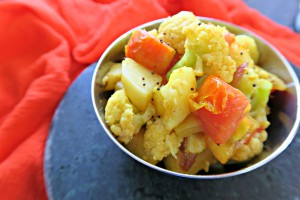 I’m writing this post five months after my month in India and I can still remember the hot hot hot sun scorching my hair, the browns and reds everywhere, the smell of dirt and cow poops and frying cumin. I can remember laying on my mattress (which was hotter than my body) and wishing for Canada. Now I’m in a Starbucks in Toronto and wishing to walk back out to that stifling kitchen and see Papu again.

But I took a few pieces of the Ashram with me when I left and some of those pieces are recipes. Kate and I spent many a morning with Papu, either in his massive kitchen with everyone buzzing about and the fires always going for chai, or in Shree’s smaller, quiet kitchen where we always got in his way. I would be asking questions, taking pictures, reminding Papu to pour his spices into measuring spoons (his cooking is second nature, and nothing is measured) and Kate would be furiously writing down every step and bit of advice for the Ashram cookbook. While potatoes were simmering or onions softening the three of us would joke around despite the language barrier. We would film “Papu’s Kitchen” and make plans for our Youtube fame.

Although there is a method to Indian cooking and every spice has its role in digestion, and every plant its role in nutrition… I care about my Aloo Ghobi recipe just because the smell in my kitchen reminds me of a place I loved to be, and a time I’ll always carry with me.

But if you haven’t been there (yet) then don’t fear. You can find someone of your own to get underfoot in the kitchen, and you can take photos for Instagram instead of the Ashram cookbook. Just because you are a beginner Indian cook doesn’t mean you can’t pull this off! I’ll teach you how, as Papu taught Kate and I.

5 tbs ghee, or oil if you are vegan

Papu’s secret to Indian cooking is preparation – having everything in its place before you start. First, chop all your veggies and pop them in bowls. Next you should measure out your cumin and mustard seeds into one little bowl and all your powdered spices into another. Now you are ready to begin. 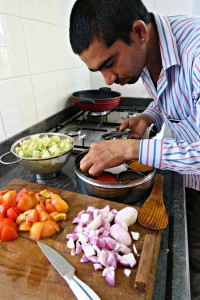 Bring a large pot of water to a boil and then pour in your potatoes and cauliflower. Boil them until they are starting to become tender, but take them out before they are all the way soft because they will cook a little more when you fry them up. Set them aside in a colander so that they can really drain.

Now heat up your oil or ghee in a pan. Papu’s trick is to put a couple of cumin seeds in with the oil and when they start to pop then you know the oil is hot enough to start cooking. Here’s where we really get going: when the cumin seeds pop drop in your little bowl of seeds and swirl them around for a few seconds. Once you can smell them you are ready to drop in your onions. Let them fry until they are starting to become tender. The oil is so hot that it will be sputtering a popping on your arms. What fun would it be if it wasn’t?

Now you can add in your powders and keep stirring to get the whole thing mixed up. Give it a minute then throw in your cauliflower and potato and toss it all around so the spices are distributed. Once your potatoes and cauliflower are warmed through again you can add your tomatoes. Cook it just for another minute to warm the tomatoes but not turn them to mush. Now you are done! We would serve this at the Ashram with chapati bread and some green veggies.
Stay tuned for our Recipes in the new Asan Cookbook, coming soon!

Hillary Maguire is a world traveling blogger / accountant / foodieÂ from Canada who visited the Ashram in October 2016 with her husband Marc. This blog post is an adaptation of her original blog entry from www.nappersnackerbackpacker.com.

Download a page from our recipe book “˜Aloo Ghobi’