Food from the bush

Living at the Shri Jasnath Ashram as a karma yogi, Iâ€™ve been appointed to write the foreword of a first cookbook and to feed the food blog of the ashram. The subject of the article came to me naturally one day when a dish called sangri was being served. Sangri is a twiggy lentil that grows in a tree named khejari. The pod of khejari is part of the family of edible non-cultivated plants along with the berries of ker and kumtha and others; ker and khejari trees are even found in the ashram premises. These plants grow without the help of humansâ€™ assistance. But they are not a weed – everything has a role: â€œthey are useful for everybody, for humans, for animals who eat the leaves and the fruits, and for the soil as natural fertilizersâ€ tells the swami of the ashram. Their survival is nevertheless in danger.

In fact, the berries and lentils are cooked in the local cuisine (see recipe below). These indigenous wild foods of the Thar desert region in western Rajasthan have great nutritional values and sangriâ€™s protein content is around 50g for 100g (especially when prepared with curd or buttermilk like it is traditionally done). Protein complementation is the process of combining different sources of proteins together as with milk and pulse, which increases the protein value by providing the essential amino acids in the right proportion.

How to cook these foods from the bush

If the ker-sangri is Jaisalmer’s most famous dish, the best I have tried is prepared in a khadi style.

First wash and soak the beans at least 8 hours in cold water. Rinse and drain. Bring a pot full of water to boiling and use this toÂ rinse then drain again.

Fry the vegetables with in ghee or cooking oil with mustard seeds, cumin seeds, a bit of red chilli, turmeric powder, coriander, and a lot of pasted garlic.

Add the buttermilk (chaach) with chickpeas or millet flour.

The thickness of the soup will appear after about 10 min of churning on slow fire. Then stop the heat and keep it covered on side.

We drive three kilometres on a small bush road; a deer jumps over the hedge and vanishes in the bush vegetation that covers the lands, while grey francolin birds run along the roadsides. We stop to take a picture of the kumtha tree, and finally reach our destination. Itâ€™s a cultivator’s household, like that of people who moved from a mud-round-house to a brick-square-house. It is made of bricks and painted all in white, and has a lovely courtyard inside with mandala drawn on the floor. Five people live in that house. Men are welcoming us, women stay inside. While drinking the greeting chai, we start the conversation.

The farmers have lived a huge agricultural revolution with the arrival of the water pipes. Before they were dependent on the rainy season, now they are now provided with water all throughout the year. They cultivate a larger variety of plants, including pulses, mustard, but not green vegetables (bought from the market). Their dietary habits have become more varied and now include green vegetables, but at the same time they have partially abandoned the consumption of sangri, ker and kumtha. Not because of the shift of taste, as it is a very â€œgood foodâ€ and part of a â€œreal mealâ€ they say, along with sogra (a galette made of millet) and pulses. Their decline in the diets is linked to entwined socio-economic factors. 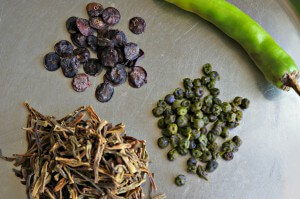 According to men (Lalnath, Birbulnath, Puknath, and Jasnath take part of the conversation), the main motive refers to the monetary value of these wild foods. The sangri sells in the market for almost 1000 rupees a kilo, the ker for about 500 rupees and the kumtha 300, which are high prices compared to pulses (sold around 200 rupees for the most expensive of them). Buyers eat these for religious festival or weddings.

As they require time to be gathered and dried out, women as well as men are now active with agricultural activities. They haveÂ sort of abandoned eating wild foods, mainly collecting themÂ to make money out of it as it is very profitable. Producers eat it only once a week at the most now, though they are conscious of the nutritional value of these foods, and feel stomach discomfort with â€œnew foodsâ€. So the status of â€œfoods from the bushâ€ has moved from a staple-food status of villagers to an expensive and fancy-food status for middle and upper class. While the gatherers make their living out of food and their diet starts to suffer, the wealthiest buy the healthiest food. 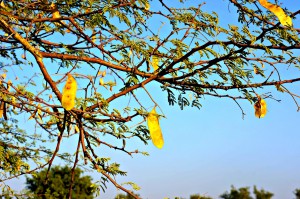 Farmers have nevertheless noticed a change in the breed because of the environmental disruptions. The sangri pods are of less quality, instead of being thin and long, some pods are rounded or twisted. As a consequence, even the business of wild edible plants is not a sustainable way of earning.

That vicious circle is not a curse. In order to combat the growing alienation from traditional food systems, actions can be pursued in and by communities to increase awareness regarding the multiple values of indigenous foods, beneficial for the populationâ€™ health and wellbeing, as part of a larger ecological picture.

For us to gain a deeper understanding of this, hearing the voice of women who used to collect these plants and are in charge of food activities in the household will bring a deeper dimension to the exploration. It is additionally required to gather, from the people who actually buy these edible wild plants from the market, the values they attach to these specific foods.

Dr. Estelle Fourat completed a PhD in Sociology from the University of Toulouse Jean JaurÃ¨s (France). Her research focuses on dietary changes, eating decisions, and engages an interdisciplinary dialogue with nutrition by analysing the social and cultural dimensions of the so-called nutrition transition, more specifically the shift in proteinsâ€™ sources in diets. Email contact: efourat@gmail.com

Stay tuned for our Recipes in the new Asan Cookbook, coming soon!

Shri Jasnath will be holding a Yogic Lifestyle Workshop in January 1 – 10, 2018Â where participants can sampleÂ delicious healthy dishes from the traditional local cuisine. To find out more information about the Workshop contact the Ashram at info@shrijasnathasan.org 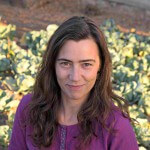 Dr. Estelle Fourat completed a PhD in Sociology from the University of Toulouse Jean JaurÃ¨s (France). Her research focuses on dietary changes and eating decisions. She and engages in interdisciplinary dialogue with nutrition by analysing the social and cultural dimensions of the so-called nutrition transition, more specifically the shift in protein sources in diets.

All photos included in this post are credit to Dr. Estelle Fourat