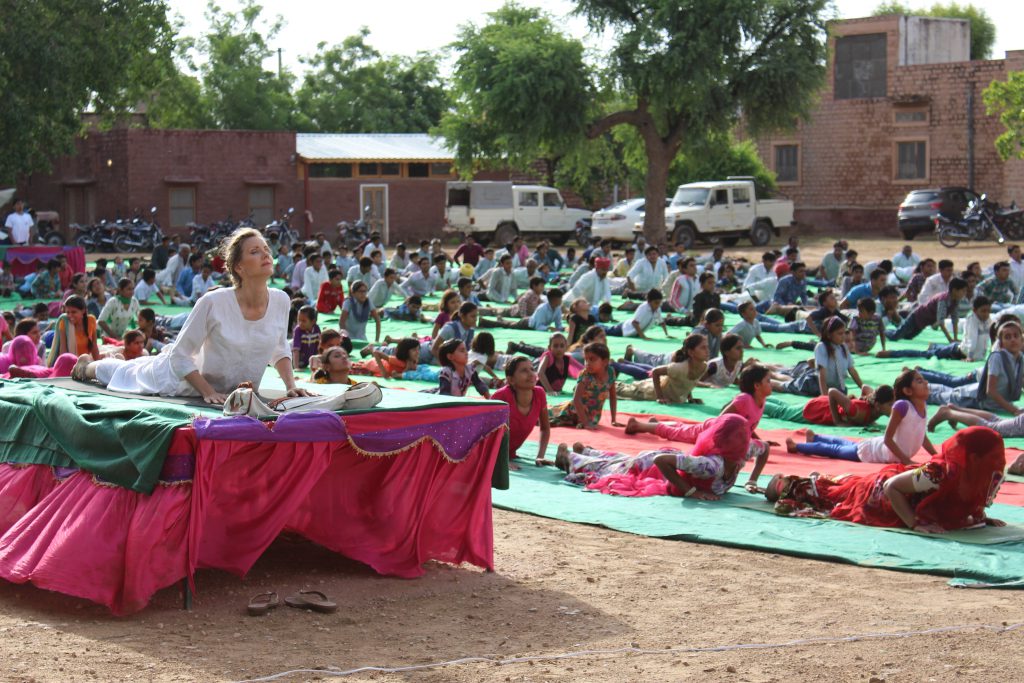 â€œIt is not the receiver that is blessed, but it is the giver.â€ Swami Vivekenanda

FAQ: â€œI thought yoga originated in India. Yet I have friends who go there to teach. Why? Doesnâ€™t India already have enough teachers?â€

When I announced three years ago that I was moving to India to teach yoga, a high school buddy questioned my audacity, â€œWow, thatâ€™s like saying an Indian is moving to America to teach baseball!â€ My aim in joining the presumed army of yoga warriors in India was, as Vivekenanda taught us, that my duty to others is found in helping myself. Many teachers come to India during their own transformation, to learn and teach. This is the perfection of teaching. â€œIt is not the receiver that is blessed, but it is the giver.â€

One day I invited a young sanyasi (wandering spiritual aspirant) to join us in yoga class. He laughed and asked, â€œWhy are you still doing asana at your age?â€ And he retired to his meditation cave in the fortress wall. I, in my tight black spandex pants, trotted off to the yoga hall to lead seven Marwari women dressed in full Lehenga (3-piece sari totaling 10 meters of fabric), scarf and heavy gold jewels, in the healthy tradition of Surya Namaskar. After class they touched my feet and thanked me for bringing yoga to India and to their children. These two bits of feedback were very confusing. Was I needed here at the ashram, or not?

I was not entirely wrong in my motivation to teach in India â€“ I have never been healthier or more spiritually focused than I am now. And from this place, Iâ€™m better able to give to others what they need from me. However, outside of the key yoga centers in India such as Mysore and Rishikesh, there is no army of yoga teachers with which to commune in this journey. In fact during my travels in the yoga jagran (gathering) program, of the thousands of villagers we have educated, only about 5% of the participants have ever heard of yoga practiced as a variety of asana (other than padmasana, lotus pose). And several girls and women have expressed surprise that women are â€œallowedâ€ to practice this type of exercise. Wow, how did this happen? Maa Bharat (Mother India) herself gave birth to this precious gift. Now where has it gone? To solve this mystery, I first needed to define yoga from an Indian perspective. Because looking out over the ocean of downward doggers (mostly men) in a tiny village whose inhabitants witnessed me as a strange contortionist from another planet, I realized that they too were doing their yoga seated in padmasana, in a cave.

Like many westerners, I thought the yoga I was practicing was the same yoga everyone else was practicingâ€¦. that my teachers had been initiated in an ancient, consistent, comprehensive theory and practicum, varying only slightly from school to school. But with research and many interviews Iâ€™ve learned that most agree that Shiva delivered 84 asanas to humanity through Gorakhnath who lived in the 11th c – 1 for every 100,000 species on the earth. But when his Goraksha Samhita was published, he mentioned only 2 asanas: Siddhasana, and of course Padmasana â€“ both for the express purpose of facilitating meditation.

During Shivaâ€™s time on earth, yoga was a tradition passed between people orally. It would have been more of an art form than a technical endeavor requiring of students compliance in any area but diligence. No one corrected Shivaâ€™s Dandasana (Staff Pose)! â€œToes up, Shiva! Keep your back straight!â€ Success in application of any of his many yoga techniques would have been imperceptible during practice because his students would be meditating. This was the purpose of the asanas he taught.

In the West there is more focus on the body than in the East. The Indians I live and practice with are more concerned with their spiritual health than having buns of steel. This explains why so many westerner teachers gain their experience and confidence here in India – India needs them! It is just as plagued with diabetes, heart disease and stress as countries in the west. The western physical consciousness is a welcome health intervention in cities and villages alike. What good does prolonged meditation do for a woman who is morbidly obese, or a man who is hypertensive? Hatha philosophy teaches us to master the body, so we can then master the mind. Many Indian yoga teachers have jumped on this wagon, adding â€œfancy yogaâ€ to their curriculum.

“It is through the body that you realize you are a spark of divinity.” B.K.S. Iyengar

The West, overall,Â  is equally lacking a spiritual bedrock of tolerance in its religious cultures, and has aggressively commercialized the healing tradition of yoga without understanding or utilizing its true spiritual and health benefits. So its not surprising that many western teachers find the eastern landscape a more liberal place to practice and teach the full array of techniques, while living in a culture that validates a focus on increased physical health through spiritual maturation and expression.

In India many generations have passed without a national focus on reasserting the scientific foundation for yoga into the public and private arenas. The east/west collaboration that Prime Minister Modi is encouraging validates the potential of yoga to stabilize and harmonize individuals and communities on both sides of the planet. This partnership will undoubtedly bring more teachers to India. Patience is needed all around. We all need to broaden our understanding of yoga in its current and ancient applications if we are to practice healthfully together in the same studios. A tall baba (old man) came up on the jagran stage one day to demonstrate his â€œyogaâ€, and then folded his 85 year old legs in an excellent Padmasana. â€œWow,â€ I said, â€œsuch a great yogiâ€ And I truly meant it.

Shreejan SitaÂ M.Sc Creativity & Change Leadership SUNY Buffalo, NY, USA; Yoga Allicance ERYT500; Lead teacher Rajasthan Hatha Yoga Institute and Yoga Therapist in the Shridevi Ayurveda Wellness Center at Shri Jasnath Asan (ashram). Shree relocated to Rajasthan, India from New York in 2013 to improve her practices in the seat of the Siddha Yogis, and to increase her understanding of yogaâ€™s interdependence with nature and social development. Shree teaches Hatha Flow, and has launched programs for young adults including the Girlsâ€™ Yoga Empowerment Camp at the ashram focusing on personal leadership and outstanding communication. Have a question? Write to her at shree@shrijasnathasan.org and sheâ€™ll find you an answer.