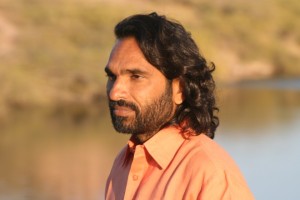 Surajnath Siddh is the 12th and current head monk of Shri Jasnath Asan (ashram), in Panchla Siddha, Rajasthan. The asan is one of the oldest educational, social and religious institutions in Marwar, Rajasthan. He was initiated into the Nath (Siddh) tradition at the young age of six, and assumed institutional responsibilities in 2001.

Surajnath conducts an annual free children’s yoga camp, monthly wellness camps, travelling jagran and satsang programs, yoga teacher training courses, and continuing education for psychology professional from around the world seeking integration in their practices with eastern sciences. His educational programs focus on keeping alive the vibrancy of the region’s spiritual tradition, and equalizing the human rights of the oppressed. A major portion of his time is devoted to counseling, and alleviating the distress of villagers that regularly flock to this sacred seat.

Taking a bold step into the future, he has renovated the asan’s medieval fort and supervised the construction of Rajasthan Eco-Retreat- an offering of relief to the modern man, caught in hustle and bustle of a restless mind. Beyond its attraction to tourists, he believes that international exchange can become a major focus for village regeneration and ecological transformation, as well as a vehicle for spreading the wellness practices of traditional Hatha Yoga to aspirants from the West.

He has been instrumental in the continuing restoration of Jasnath Sarovar (village pond), regional afforestation of indigenous trees, rainwater harvesting in select areas, as well as continued rehabilitation and welfare for more than 300 cattle.

He has an abiding interest in solving miscarriage and drug abuse problems, sponsoring a free Ayurveda clinic on the ashram campus, and a travelling drug de-addiction program to districts further northwest.

Though simple at heart, he admires outdoor sports, the cultures of Europe, and has travelled throughout many of its countries conducting yoga seminars and workshops. 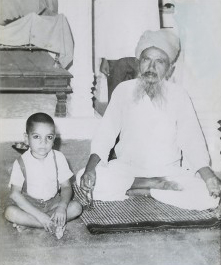 Surajnath Siddh is seen here beside his dear guru Ganeshnathji.