Karma Yoga ““ Stepping Into the Stream 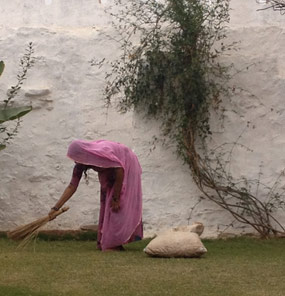 “Give yourself up ““ it is the best way of finding yourself.” The Mother, Sri Aurobindo Ashram

I arrived a little early to lead yoga class this morning so I sat in the garden enjoying the early sun for awhile. With my eyes closed I listened to Kabu’s broom as she swept the grass clean of fallen leaves and debris. She joins us at the ashram when she can, doing whatever seva is required ““ and is persistently contented with her service. The swoosh swoosh rhythm of her broom was mesmerizing, like the velvety lapping of the Ganges as it settles at sunrise at the feet of the Himalayas, diligent and dutiful.

Karma means to do in Sanskrit, or work. Everything we do, physical or mental, is karma. Everything leaves a mark on us. So our character is then manufactured from karma, whether or not we believe in previous lives. In this sense, then, any kind of work we do, in service or exchange, is simply an opportunity or event created to study and bring out the power of the mind.

But our soul responds very differently to paid and unpaid work. When you work without expectation of any kind of material validation, you are building character from the inside, with energy and intelligence that you were born with, which enhances your true nature. Swami Vivekenanda taught us that unselfish work takes the veil of the mind off of the soul, revealing the inherent knowledge that was there all along.

When I first arrived at the ashram, I thought doing work for work’s sake only would be as simple as picking up a broom when no one asked, and expecting no appreciation. I was soon disappointed that the cause and effect mechanisms instilled by the arts of capitalism were far deeper than any intellectual decision or physical maneuver could alleviate. And the second unfortunate lesson came shortly after, that craving altruism was my mind’s survival technique to remain paramount in my daily work, bent over a broom or the washing machine. How was I to escape the training I’d received, enough to get a glimpse of my true potential?

Every day as I went about my tasks as a sevadhari (volunteer in service) at the ashram, I stayed just an arm’s length away from the karma yoga zone, or Flow as Mihaly Csikszentmihalyi calls it in his book “˜Flow: The Psychology of Optimal Experience’ ““ that place where you lose yourself and are no longer working for any other reason than because the work calls you to it. Swami Vivekenanda also said that a person “who can work for five days, or even five minutes, without any selfish motive whatever, without thinking of the future, of heaven, of punishment, or anything of the kind, has in him the capacity to become a powerful moral giant.” But craving this status will hinder our progress, and letting it go will accelerate it. And letting it go requires self examination, asking ourselves what is the true motivation behind our work.

While observing Kabu’s work my frame of reference changed. She is a smart woman, by Indian standards. But she starts with the work that comes to her and slowly makes herself more unselfish each day. Gradually her selfishness will melt through her persistence. She isn’t just “brooming” as they call it here; she is building character, removing her mind, revealing her soul, and giving air to her original intelligence. This purity surely adds peace to this world.

So I think karma yoga is like this mother Ganges that feeds all of India. It is a spirit stream of goodwill stemming from the heart of the universal energy that governs this place. When we step into it and allow its purity to carry us away, along with all the other servants, we join an army of workers cleaning and designing our world ““ we become both liberated and complicit at the same time. One year ago I didn’t know that “brooming” was in the fashioning of a new world, but I feel it now. Happy swimming.